Dan, not committed to it (I have a text message from him that says so.)

When Reagan was in the hospital, I was trolling Facebook and I saw a beautiful Tula on the buy / sell / trade site for an amazing price. I commented that I would love it, but there’s no way my husband would say yes. A friend of mine convinced me I needed it (she will remain nameless – I don’t want any hard feelings between her and Dan 😉 ), so I said I wanted it. The seller said I had first dibs because I showed interest in it first. I, naturally, couldn’t get a hold of Dan so I was freaking. I finally did, he made his usual hums and haws at me when I say I NEED something, and it was mine!

The seller threw in some extra fabric as well and I had no idea what I was going to do with it.

Fast forward almost 3 months. I had been staring at my sewing machine for what felt like ever. It moved over to the new house, still unused. I felt like I needed to do something with that fabric for Reagan. As corny as it sounds, it symbolized our hospital stay. Weird, right?

Disclaimer – I am not a seamstress. So I am not using correct terminology. Also, my stitches are not perfect by any means. 🙂

I set off to (yep) Pinterest to figure out how to turn it into a blanket. I thought it would be cute to add the little ribbons to it too because I love sensory stuff for babies. 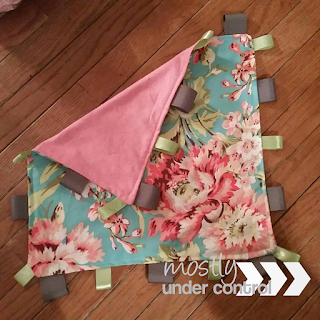 I will not show you close up photos because it’s ugly – haha. But she doesn’t care. I just love that even though our Tula days will come to an end at some point, she will have this forever.

I am way too sentimental.

I decided since I made this on my own (with only one incident, thank-you-very-much), I would do a tutorial on one! Instead of add it to my Etsy shop. Because I have way too much stuff in there.

I started with a charm pack (a pack of 5×5 squares of fabric) that I had lying around my craft room. (Along with about 1,985 other craft items). I used pink flannel for the other side because I had some on hand (you’ll also see this pink flannel in Friday’s blog post). Wash it first. I really wanted to do minky but after some advice from people who actually sew, I decided against it. I guess it is really hard to sew because it is stretchy.

So, choose your 4 charm pack squares. You could really do as many as you want, but for this tutorial I wanted to go small. Lay them out how you want them to be in your finished product. 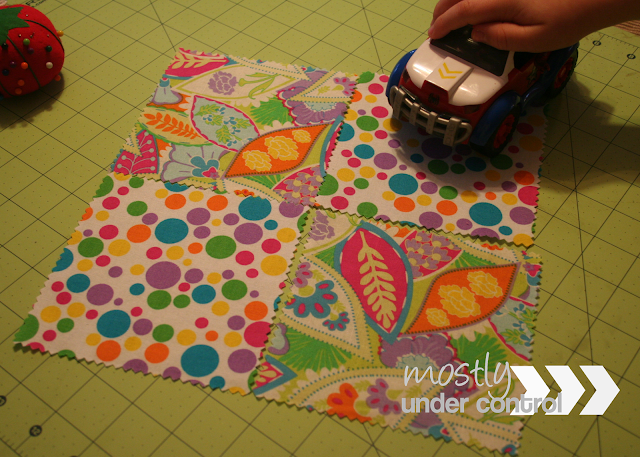 …Because it wouldn’t be a tutorial on this blog without a random car.

Start with 2 next to each other (I did the top 2 first) and lay them on top of each other, right sides against each other. Sew them together on the edge (if you’re doing it the same way I did, this will be the top middle seam.) 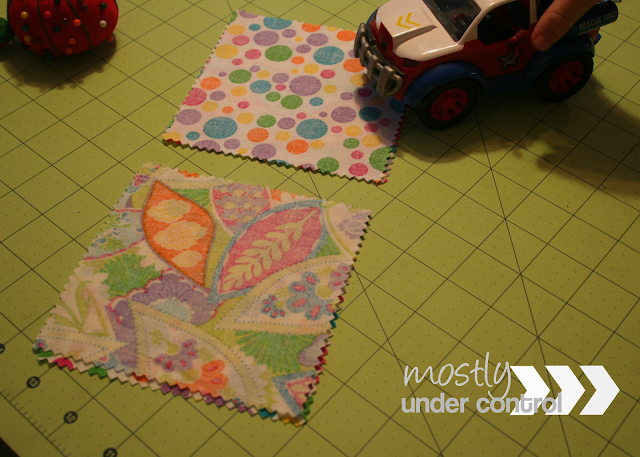 Take the next 2 and do the same.

Now you have 2 rectangles (Sorry, I didn’t take pictures of these because I did it late at night and wasn’t thinking). Put them together (right sides in) and pin them before sewing on the long edge. Trust me. I am all about short cuts, but you do not want to short cut this step.

Sew the long edge so you’re finished with a square of 4 squares. Measure your final product and cut a piece of flannel that size. Flip the charm square piece over and iron the seams flat. Again, I am all about skipping steps but this is not a step you want to skip. 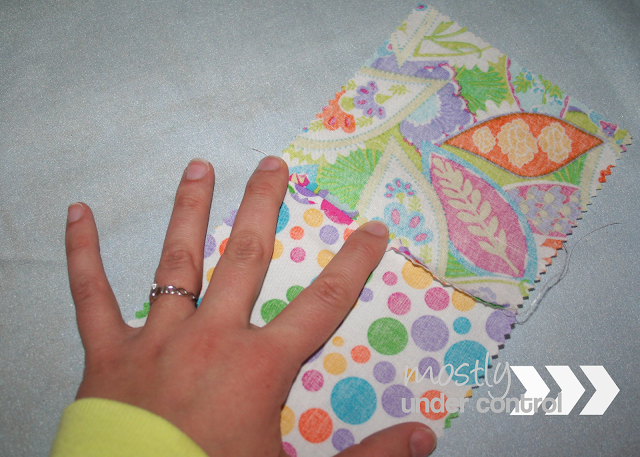 Now you’re going to get the ribbons ready. Cut your various ribbons in 4 inch strips. Fold them in half and pin them on the flannel, with the folded part inside. If you pin them on your patterned piece, you want to pin them on the right side. On the corners, make sure you give plenty of room between the last ribbon on one edge and the first ribbon on the next. I didn’t make enough room on one on the first one I did so I sewed them together. Oopsie. Learn from my mistake! 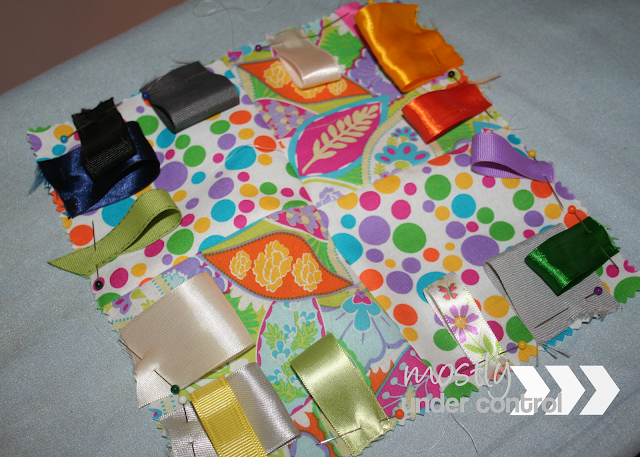 With the ribbons facing upward, sew the ribbons onto the fabric where you pinned them. It doesn’t matter where you start for this one. 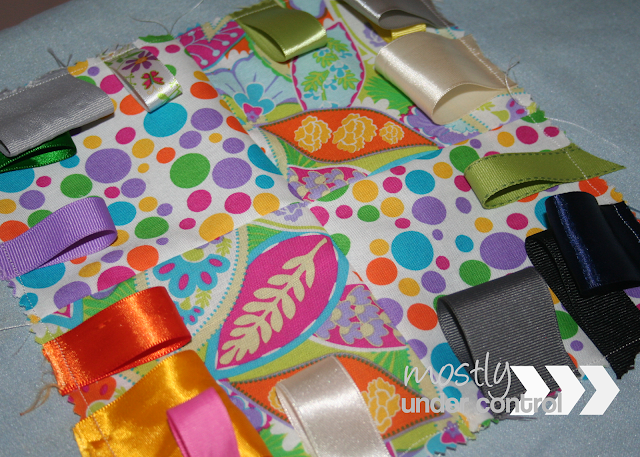 Take your fabric with the ribbons and put it ribbon side in and place it on your other side of fabric, right side in. (I cut off that excess pink). 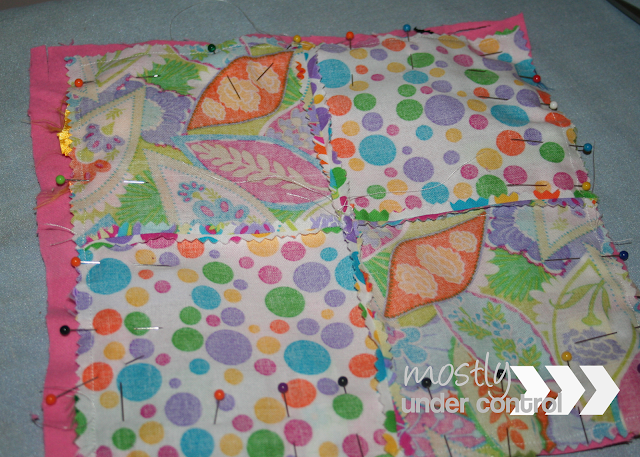 Starting about a quarter of the way in on one side, sew all around to attach them together. When you get to your side where you started, only sew about 1/4 of the way in (you need this open space to flip it right side out.) 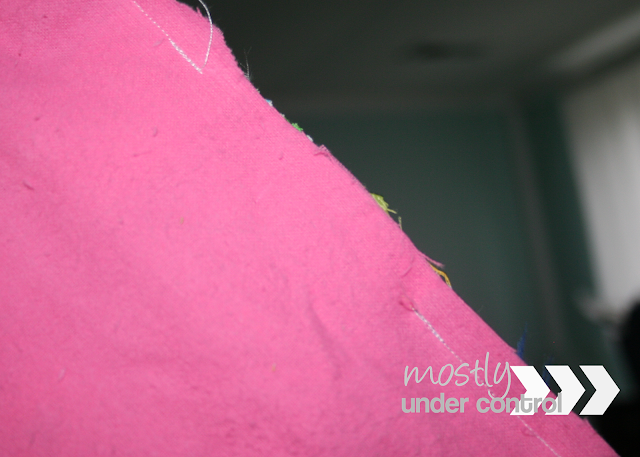 Flip the blanket right side out and fold in the opening part and pin it shut. Sew a top stitch all around the blanket to shut it closed. 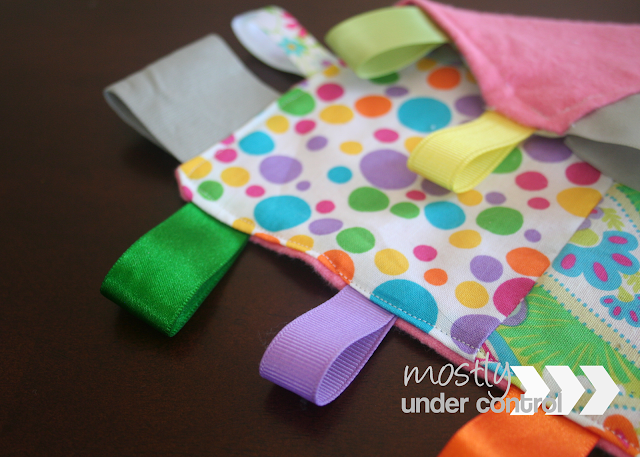 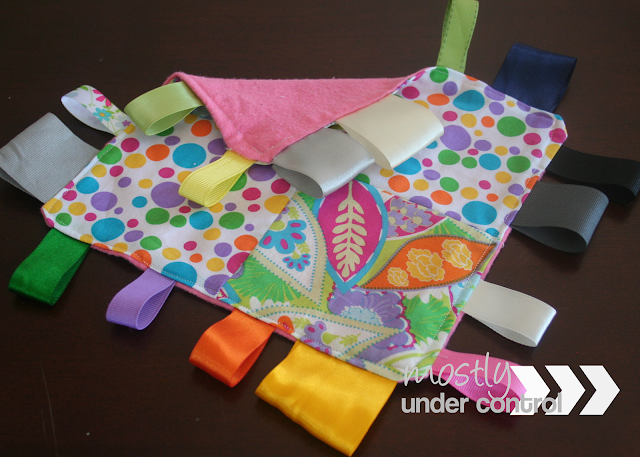