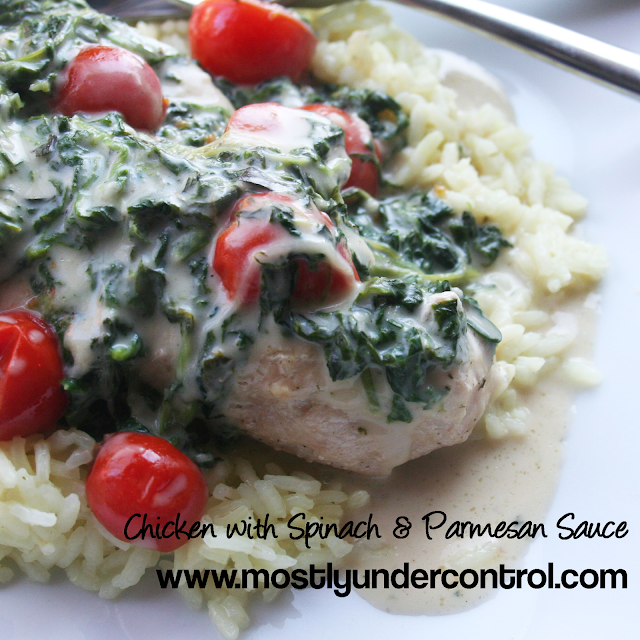 If you follow my recipe collaboration Facebook page Melanie’s Mess Hall, you know that I (try to) meal plan. I started posting on there what my plan is because I feel like it makes me be more accountable and I actually stick to it. Last week (and this week, for that matter) we started scraping the bottom of the barrel for meals. On there was a vague “chicken / spinach / rice.” Well, on that night, Dylan had an eye appointment at 4:40 so we ended up just grabbing Arby’s on the way home. I love me some Arby’s.
I was feeling very lazy (shocking) the rest of the week so I kept putting off the chicken thing because I knew it was going to take some thought. I literally had in my head that I would use spinach, chicken and rice. That’s it.
So Sunday night comes and the chicken is sitting in the fridge so I can’t put it off any longer. It’s go time.
This was such a delicious concoction! I found some grated parmesan cheese in the freezer that I pulled out to use as well.
We will definitely make this again. My favorite part is that it makes a lot of sauce. Most of the time when I make stuff like this there is not a lot of sauce.
Ingredients:
*4 boneless, skinless chicken breasts
*Salt
*Pepper
*Garlic powder
*Olive oil
*1 package (10 ozs) of frozen spinach
*A splash of cooking wine, beer, chicken stock (something to deglaze your pan)
*1/2 pint of cherry tomatoes, sliced in half (you could do a whole pint. I did 1/2 because that’s what I had in my fridge
*2 tablespoons of butter
*2 tablespoons of flour
* 1 1/2 cups milk – separated into 1 cup and 1/2 cup (the fattier the better – I used 2%)
*5 ozs grated parmesan cheese
*1 cup uncooked rice, cooked
Directions:
Preheat the oven to 400. Prepare your chicken by drying it off and brushing on olive oil. Season with salt, pepper and garlic powder.
Place the seasoned chicken in a baking dish and bake for 10 minutes. After 10 minutes, flip them and cook for 15 minutes.
While they’re cooking, take a large skillet and add 1/4 cup water. Once it’s hot, add the frozen spinac and turning occasionally, let it cook and thaw. Once it’s thawed, remove it from the pan. (I threw them into a bowl with my sliced tomatoes).
Take a splash of your deglazing liquid and add it to the hot pan. Scrape up any excess spinach. Turn it down to medium heat. Add the butter until melted. Whisk in the flour until it’s all mixed with the melted butter.
Add 1 cup of milk, about 1/3 of a cup at a time. Whisk after each addition until thick. When you’ve added all the milk, whisk constantly until the liquid can coat the side and bottom of the pan. Add the cheese, salt and pepper. If you want it thinner (I did!), add 1/2 cup of milk and stir.
Add the spinach and tomatoes. Stir until they are combined with the cheese sauce.
Place the chicken in the sauce and let simmer for 5-10 minutes.
Serve on rice.
Of course, Dylan wouldn’t touch it. He acted like it was a rare form of Medieval torture. I had to stifle my giggles watching him whine and cry with a piece of spinach hanging off of his fork. #momoftheyear
Dan and I loved it! 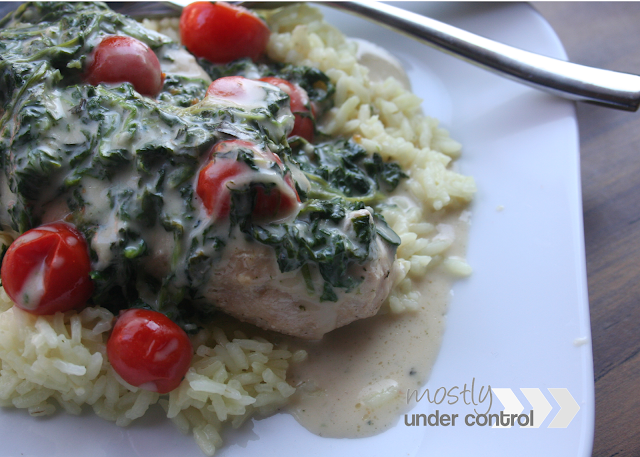