D has totally been into monsters and dinosaurs lately. I also have been meaning to make him some felt board sets and a felt board. I saw something on Pinterest with mix and match monsters so I went for it. I did use my Cricut, but you could very well cut them out yourself. I used my Cricut for the monster bodies and then since I didn’t have a deep cut blade, I couldn’t really get good cuts for the eyes and mouths, so I just used scissors. And since they’re weird monsters, it doesn’t really matter that they’re not perfect 🙂 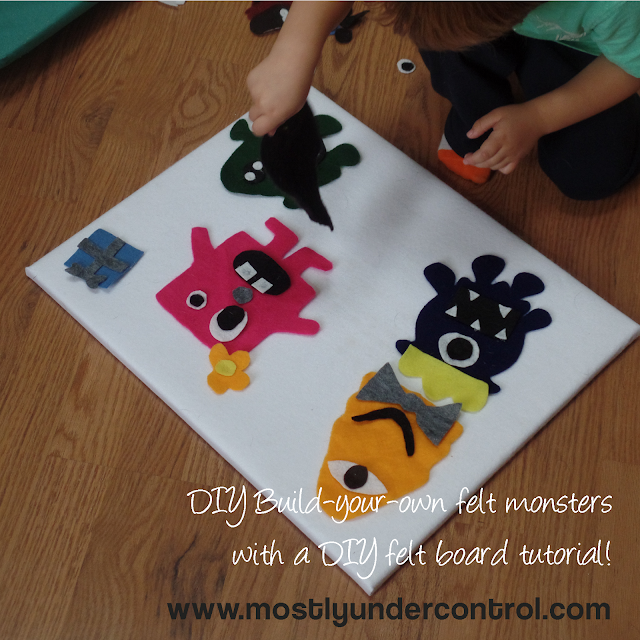 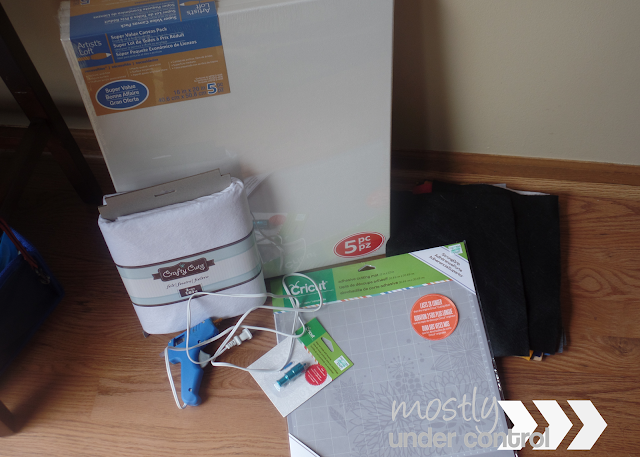 *Large canvas – you pick the size. They were on sale (a pack of 5 for $12.99) at Michaels this week so I went very large – 16×20. I am 100% sure I will find other things to do with the other 4 😉
*Felt to cover canvas – you can choose whichever color you want. I went with white and bought a pack of 2 yards.
*Glue gun
*Scrap felt or felt sheets. A good friend of mine who is no longer teaching gave me a ton of felt – thanks Kim!
*If you’re using your Cricut, you’ll want the strong grip mat and a deep cut blade. I bought the wrong housing for the blade and have to return it, so I ended up not using the deep cut blade – just the regular blade and the strong grip mat. I set my Explore to “felt with backing” and it cut each shape twice. Once I was done with the monsters, the mat was not gripping all that well. So I just decided to do the rest by hand. No big deal. I was having problems designing the accessories with Cricut Design Space anyway.

I bought the shapes off of Etsy through Wandering Birds. She has a ton of great clip art and I will definitely be purchasing from her again for the templates – the ice cream cones are adorable! I am thinking I might do another felt board set with those.

So I did the designing on design space, but if you don’t have a Cricut, you could easily print them out onto paper and use those as tracers. Once I started cutting out accessories, D started realizing what I was doing and went crazy. He wanted to play SO BAD. So I gave him what I had and let him go to town. He loved it. He ended up playing for about 2 hours. 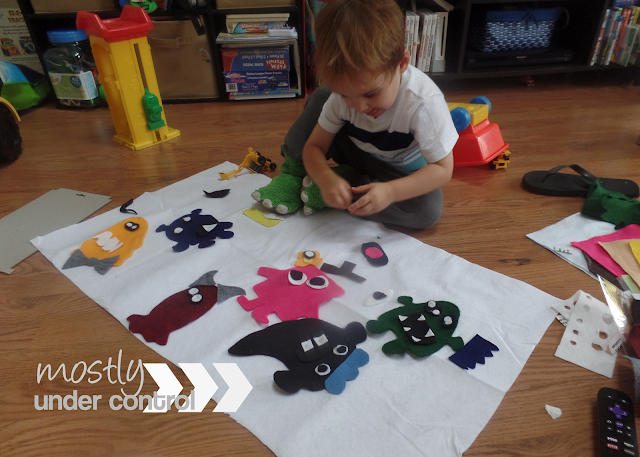 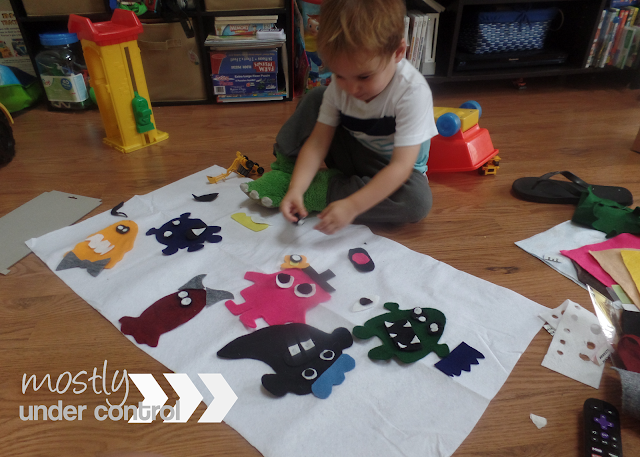 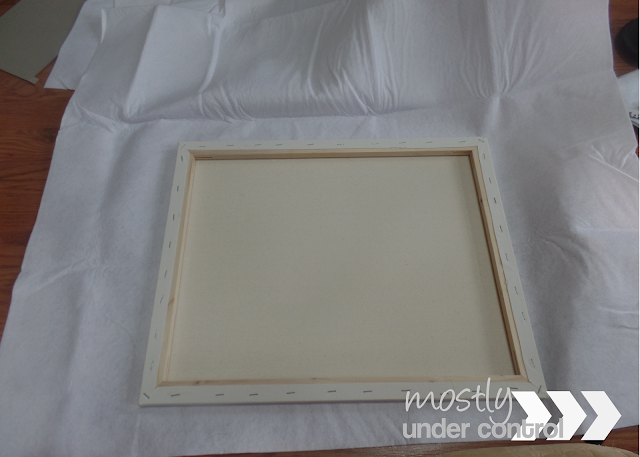 It needs to be ironed so I ironed it on low to get the creases out. (Upon googling, apparently you’re only supposed to iron felt on low. This wasn’t working, so I turned it up to high to see what would happen. It was fine and got all the creases out.) Cut the corners of the felt so they lay correctly on the back of the canvas. 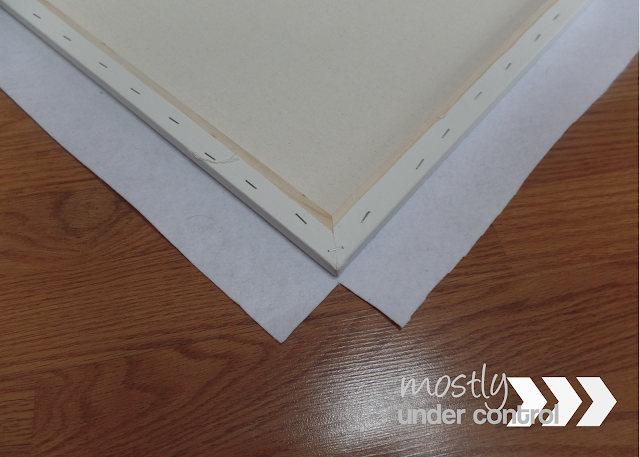 Take the glue gun and glue the edges of the back of the canvas. Do this quickly because glue gun glue dries fast.  Fold over the felt onto the glue and wrap it around.

Since I am all about saving space, I took it a step further (farther?) and created a pocket on the back with my scrap felt for the monsters in a bag. Once I build up our felt board collection, I will get a bin in which to store them all. But for now, this works.. I am NOT a sewer, so I just cut a square of felt and hot glued the 3 edges leaving it open at the top, and then glued the top of another piece and added some velcro that I had laying around, but the velcro is not necessary. 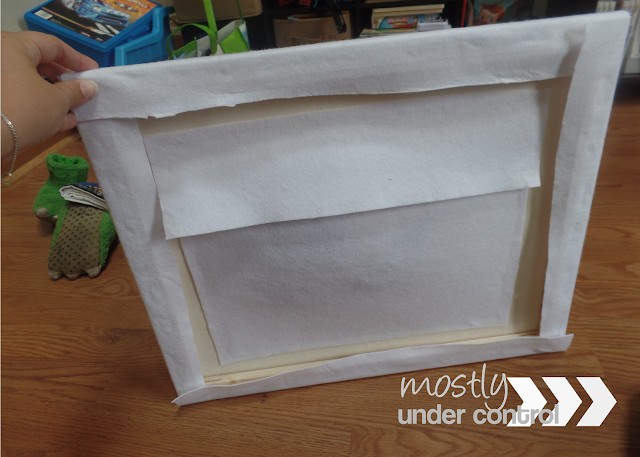 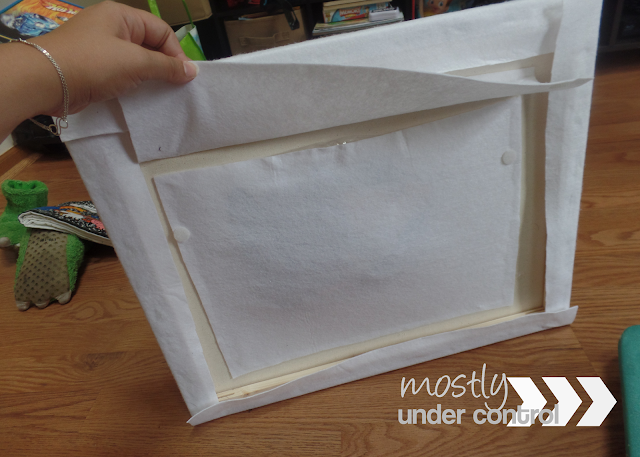 Ta da! You have a felt board and your very first play felt set! I think this could become addicting….D kept asking me to add accessories (bowties, hair, hats, horns, more eyes, teeth) – he even wanted presents for the monsters to give each other. 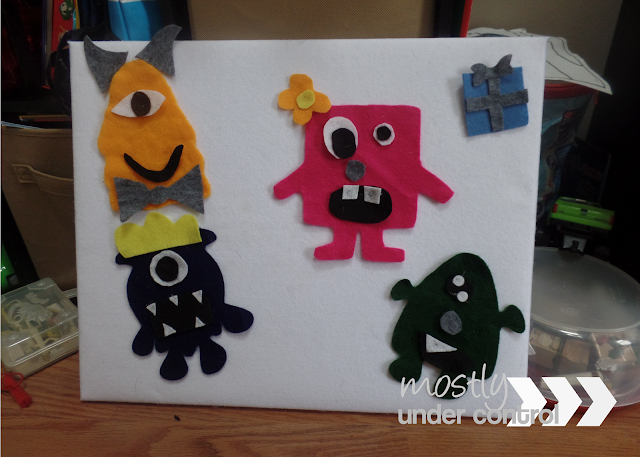 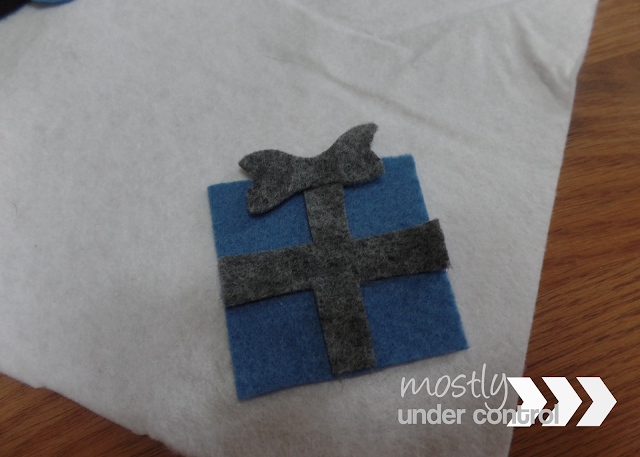 This kid’s imagination is just too much. When we cleaned it up for quiet time before bed, he mentioned twice that he was going to play with it tomorrow morning. Cracks me up. He also has already requested a dinosaur set 🙂