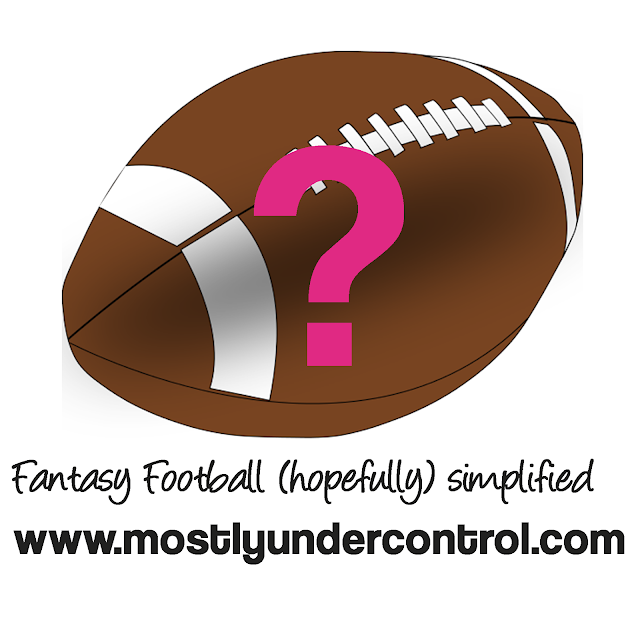 3 years ago I was asked by a good friend if I wanted to join an all girls fantasy football league. My initial answer was “um, no” because I knew nothing about football, let alone fantasy football. All I knew about it was that my husband was in a league with his college buddies and their draft consisted of all of them screaming at each other and drinking beer for hours on end, they played each other every week with the teams that they created and that my husband was the commissioner (the “leader”) which basically meant we had to hold onto a giant (GIANT) piece of paper with stickers on it saying who picked whom. One year the draft was at our apartment in Chicago and one of the said stickers ended up on a picture frame in our place. I think we have D-Man to thank for that one.

Anyway, I decided to do it because my good friend explained that no one knew what they were doing. So I figured it would be fun, and a good excuse for some girls to to get together and have a draft. After listening to my husband’s very few stories about his drafts, doing a little research myself and doing 3 years of football drafts, I thought I’d put together a Fantasy Football Simplified blog post. I told my husband all of my “tips” and “rules” to which I try to stick, he said I should go for it.

**Disclaimer: I am by NO MEANS an expert fantasy football drafter! I am far far from it. This is just what I’ve learned and I’ve been told it’s been pretty helpful. Here goes nothing…

-I start by downloading a list of all the rankings of the players. The one that my husband finds for me has a lot of formulas and mumbo jumbo, but I hide / delete all of that. I can’t figure out how to add it to this post, so email me and I’ll send it to you if you want it 😉 (mostlyundercontrol@gmail.com).

-Each tab is a different position. So we go through the draft and each time someone picks someone, we mark it off on our lists. I highlight them out a different color. It is pretty much required to shout out the position of the player as well as the name in our league. Because we generally have no idea where to look for them on our sheet.

-Leagues can vary, but for most leagues, you need on your team:
-1 Quarterback
-2 Running backs
-2 Wide receivers
-1 Tight end
-A flex position (ours is a running back OR wide receiver)
-1 Kicker
-1 Entire defense (some leagues choose their defense individually….I think this is insane.)
-5-6 bench players (I’ll get into who you want on your bench in a minute.)

-Your bench:
-You definitely want another quarterback because they score a lot of points. Each season, your quarter back is going to have a bye week (a week where they don’t play) so you need a back up to play for him when he’s not playing. I found this out the hard way in our first season. I did not have a back up so when my quarterback wasn’t playing one week, I had hardly any points. You don’t want that to happen.
-My husband makes fun of me because I pick up a back up kicker as well. I guess what most people do is just drop their kicker for their bye week and pick up another for that week. Then you can hold onto that kicker for the rest of the season, or try to pick back up your original. I don’t like dropping and picking up because I hate regret. The only time I drop and pick up is when someone on my team is hurt or questionable (most league systems will tell you) and I don’t think they’re going to be able to play.
-He also makes fun of me because I pick a back up defense. Pretty much for the same reasons as the back up kicker. This year I did not get a back up defense. I am truly living on the edge.
-Don’t pick your kicker first. Again, not sure why this is. As a general rule, you pick your kickers and defenses last (even after your bench).
-The rest of your bench you can do whatever you want. I do another tight end (because you need one for your tight end’s bye week and what if yours gets hurt?) and a few wide receivers so I have about 4-5 total wide receivers and 4-5 total running backs. Remember, your flex position can be either a wide receiver OR running back at any point in the season.
-You must set up your line up before the first game on Thursday night. I am terrible at this and my husband has to remind me every week.

Some people will go into this knowing who they want on their team. I don’t. Because when someone picks who I want, I get super pissed that it messes with everything and I can’t handle marking off names on my main list and my personal list. Towards the end, I sort of pick guys based off of their cool names. It’s gotten me real far. Not.

I love playing with these girls because we all have no idea what we’re doing. Except my sister. She totally knows. I am not sure who invited her 😉 It’s getting easier as the years go on and I hope we keep playing!